Merry Christmas, Happy New Year And All That Jazz!

It's been a busy holiday season, so no posting for awhile.  Let me fill you in.  It was Jillian's 2nd Christmas, and the first that she could make an attempt at opening gifts.  It was hit and miss - sometimes she was happy to pull at some paper, and crumple up tissue, and other times she wanted nothing to do with the gifts.  Next year will be much different I am sure!

We were very lucky to have many Christmases...the first one was at home on Christmas morning of course!  Santa was very kind and we all had a wonderful morning, followed up by a nice breakfast of bacon, eggs, toast, home fries and juice.  Yummy!

Here is a pic of Christmas eve - it's a great one of Ryan and the best we could do with the wiggle worm. 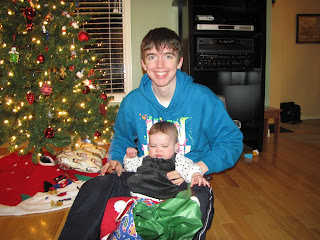 Here is Christmas morning when Jilly found her new chair from Santa! 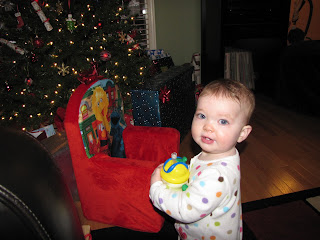 Later in the day we went to my in laws for a family Christmas dinner with presents galore!  Jilly didn't eat much but we think she was a bit overstimulated, with all of the presents, people and excitement!  The next day we headed out to my mom's for another Christmas.  At one point I noticed we were all sitting around chatting and Jilly was alone with a gift in the middle of the room...she just began to open it all by herself.  She worked and worked and eventually got the whole thing opened.  It was so cute! 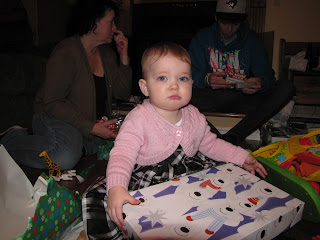 On the 27th, my dad came over for the final Christmas.  We opened gifts and had a good evening until Jillian, who'd been playing happily with Grandpa on the floor, turned and vomited everywhere!  She was okay the rest of the night but by the following evening began to get a fever and became sicker and sicker.  We took her in after a couple of days and it turns out she had a chest infection.  Thank goodness for antibiotics - after one day on them she already began to improve.  In all that times, New Year's passed...I rang it in rocking my sick baby in her room, while the hubster sat on the couch watching tv.  We are SUCH party animals!

Baby girl is feeling mostly better now - she is finally eating again and she is a happy smiling girl ...thank goodness - that incessant "whiiiiiiiiiine" was getting to us!

Anyways - Happy 2012 everyone - I hope your year is filled with health and happiness and maybe a little bit of fun excitement!