Bring on Winter!  I live in the second coldest capital city in the world.  We normally have several centimeters of snow by mid November...sometimes we even have snow at Halloween.  So I ask...where is it?

We've had 2 significant snowfalls so far - the first melted within two days (not before I shovelled it all though!) and the second was last week.  Here is a pic of the first snowfall... 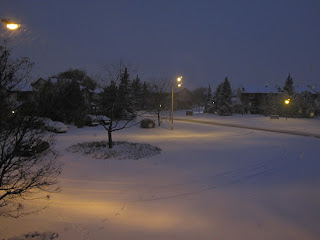 And the most recent one last week - love the way the snowflakes look! 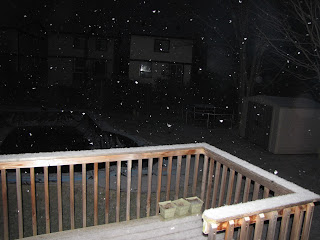 There is still some on the ground but it's mostly blown away or melted as well.  It's December and it's about time - come on snow!

We went to visit my Grandma today - she was happy to hear we would be coming so off we went.  Miss Jillian wore her birthday coat and hat for the first time.  She wasn't super keen on the hat but we got a few pics.

This one is when she first got dressed - she didn't quite know she had something different on. 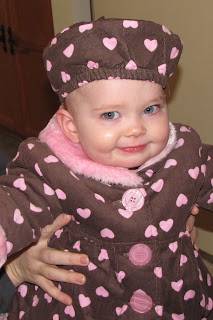 Realization sets in
"What the heck am I wearing???" 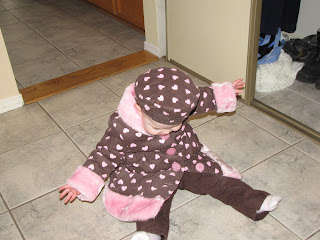 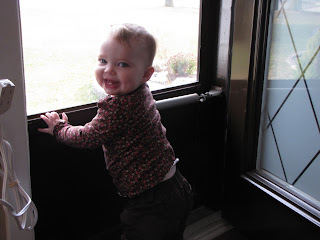 Once at Grandma's, she was a bit shy but not too bad, eyeing poor Grandma as if to say, "You're okay, but don't come too close!"   I guess at Thanksgiving we forgot her pink ball there, so once she found it she was in fine form throwing it, rolling it, crawling after it and then lunging on it with her teeth out, as if to pounce on her prey.  At one point Grandma brought out a funny Christmas apron and while the hubster and I laughed, Jillian suddenly belted out a 'hahaha' from her gut.  It was great timing and we all laughed at her, which made her giggle more. 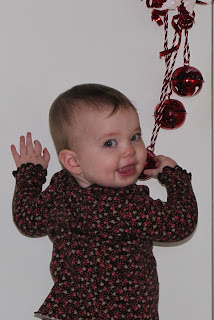 Although she's not yet walking, she is so close, and will pull herself up with one hand using my pant leg or a piece of furniture.  Right now I think she's more cautious than anything, and when she does decide to get somewhere, she gracefully drops to her knees and off she goes.  It's much better than when she first learned to stand and she would drop to her bum rather forcefully causing us to cringe...thank goodness for puffy diapers!