My sweet girl is sick again.  The last two winters have been brutal for her.  I am hopeful that this will build her immune system, but fearful that it may be the beginning of many, many more illnesses.  Oh well, what can you do?

Today I am working some (emails etc) and taking a few hours lieu time for any time I don't work.  Thus far I have only put in about an hour of work, spending the rest of the time cuddling my girl.  She was coughing yesterday and had a fever at bedtime.  She then vomited twice in the night, necessitating a full change of her clothes, sheets and pillow.  Strangely, while she had 20 stuffies in bed with her the first time, not one of them took a puke-hit...not even a bit.  We have no clue how they escaped!

She's still not quite old enough to even know what vomit is, let alone know that it is coming or that it might be better off in the toilet or garbage.  When I went in the first time, I couldn't tell that she'd puked, and she denied it when I asked.  The second time she greeted me with "Mommy, I throwed".  Of course I laughed.  We did a load of laundry each time she threw up, mainly because we only have 3 crib sheets, so didn't want to run out if she kept going.  She cried in the night around 1:30am as well but my honey got up with her (she only wanted her babies back in bed with her).

Today I kept her home and she slept until almost 8am!  She still coughing quite a bit, has chest congestion and a fever and what appears to be a headache that worsens when she coughs.  Poor thing.  We watched "Woozy and Bud" for a little while (Toy Story) and then I popped in her new Lion King movie. 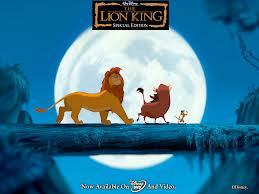 She wasn't too enthralled with it, but at first she was very interested - she asked who the characters were and I told her.  We watched all of the animals converging on Pride Rock.  Then she asked who Scar was.

"What is Scarf doing?"

Yep - it's quite fun to watch with her!  She spent the rest of the time only half watching, asking where Pula was (I think she got Nahla and Pumba confused???)

She hasn't eaten much since lunch yesterday and she is definitely miserable.  Today I just spend the day trying to keep her comfy and pain free.  (And vomit free if possible!)