We have a dinner every year around Christmas with our neighbours.  How nice you say?  Well, let me clarify - it's not actually with our current neighbours...but with the neighbours that all still live beside each other from the street we moved away from 2.5 yrs ago.

We started it of course while we still lived across the street (and gosh it was more convenient that way!), and have taken turns hosting each year.  Everyone brings some contributions to the meal and we eat, drink and be merry.

This year we hosted - and bless them all for coming since it's a bit far to stumble home in the cold.  I decided to try to make a vegan appetizer for my friend who has decided to stop eating normally and only eat black beans and rice (just kidding!!) I looked online and found a great recipe for avocado fries.  it looked quite yummy and different, so off I went to the health food store to get the ingredients. 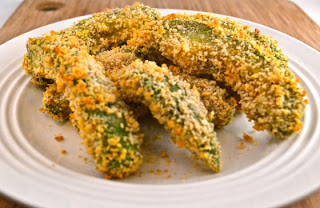 Baked Avocado Fries
Unfortunately, i left it to the last minute, and the health food store was out of Panko bread crumbs, vegenaise, soy free vegan butter, and clearly anything included in this recipe and dipping sauce.  So I decided to do something else with the mountain of avocados I had already bought.  (If you want to try the avocado fries above, here is the link to the recipe - Avocado Fries and vegan dipping sauce
I then got the bright idea to make a homemade guacamole - something I have not only never attempted, but have eaten only a couple of times.  It was in Montreal for my mom's 60th birthday that I first ﻿had homemade guacamole, and realized that it had so much more flavour and texture than the store bought stuff I avoided.  The authentic mexican restaurant made guacamole right there at your table, and it was marvelous!  Off to Google to find a recipe, and find one I did.  Most used lemons, however I had bought limes so it took awhile to find a lime one.
Finally I found one and started my very first guacamole...and it was heaven in a bowl. Seriously - it was ahmazing!  Here's a pic of the final product: 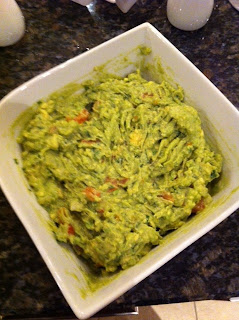 The pic is a wee bit blurry, but in person it was delicious.  So delicious in fact that I used my second last avocado the next day and made a mini version - and ate the whole thing as my lunch.  Nom nom nom!

Of course it's only afterwards that I realize I actually didn't take many pictures that night - could be due to the lovely white wine I was drinking, or the great company that kept me occupied.  At the end of a great night, we put the food away, only to find these in the fridge.  Yep - a bowl of olives and a bowl of pickles that never made it out to be served.  My mother always has a list handy every time she has people over.  She diligently checks off each 'to do' item, and each food item, to ensure she never misses anything.  I laugh at her ... but she never has this happen so maybe she is on to something!  Oh well - we dug into the pickles the next day and they were just as yummy! 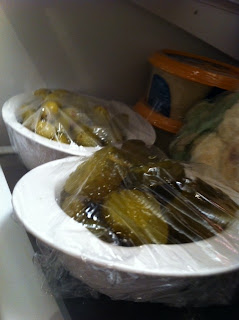