I Have Super Powers!

The title says it all.  I realized today that I have Super Powers.  I have the power of ...wait for it...Invisibility!


Those of you with teenagers will get it...those with smaller children, stop reading now.  Really.  I don't want to ruin the surprise for you!


So for those that kept reading, you obviously have or have had teenagers, those half grown creatures that only slink out of bed as the sun is changing courses from east to west, and spend what seems like four hour stretches in the bathroom only emerging as the sun sets, ready to start their day night.


Last night I dropped my half grown boy off at the local hockey rink at 9:00pm (yes, my bedtime).  Along the way we collected another half grown boy/man.  I proceeded to attempt conversation with the two half-men...nothing.  You know the sound crickets make...well it's winter and there're no crickets.  They just sat there in the car, itching to get out of the company of someone older than 25.


As we pulled up I asked my half man/boy if he had his phone so he could call for a ride home.  The response - "hm".  What the heck does "hm" mean?  Apparently it means "yes".  (I *think* that means I also speak another language).  I said "Have fun" and they got out of the car.  I said "See you in awhile" and the doors slammed.  I suddenly realized I might be invisible.


I could see myself in the rearview mirror (I checked) so I knew I wasn't a vampire.  Just invisible!  The thoughts tumbled through my head - what can I do with this new-found power?  I could hang out near my son and find out all the teenage gossip, I could look over the Hubby's shoulder to find out all of his computer passwords, OR...I could make myself invisible when the baby cried so someone else would go and tend to her at 4am!


Muuhuuhahahaha  I am so excited!

While we are on the subject of half grown people - why is it okay to leave the water filter in the fridge when it is *this* empty? 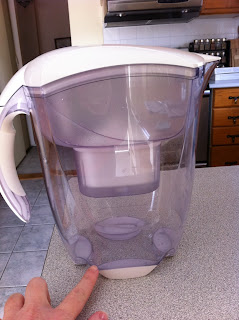