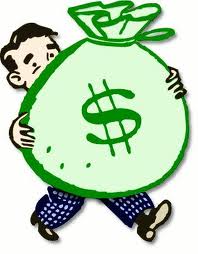 Who are these people who find a bag of money just sitting somewhere?  I want to know.  All too frequently I hear a news report about someone who has found a bag or suitcase full of cash (who carries a suitcase of cash anyways?) and turned it in to authorities.  I'm sure they are very good people but let me tell you if I ever find a bag of money I'm not saying a word.  Nope.  I'm gonna scoot home to count my big ol' bag of bills and then decide what to do with it...maybe a vacation...or a lexus...or maybe a personal chef to cater to my every craving!

I do have to say I like to see people rewarded when they turn in something they have found like this story.  If the envelope is not claimed they will get to keep all of the $14 000 and if it is claimed, they still get a percentage as a 'finder's fee'.  I like that.  I remember once hearing about someone who had turned in several hundred thousand dollars and when the absentminded rightful owner appeared he gave them $100.  Ummmm excuse me - I just gave back hundreds of thousands of buckaroos and you give me $100?  Really?  Seems cheap to me, but anyways.

A short while ago a teenager in Dallas, Texas found an envelope with $2000 in it near a mall and brought it to the nearest bank, who contacted police.  Although the practice in past had been to wait a set amount of time and then return it to the finder, the police decided to implement a new policy allowing them to keep the money.  I know people don't turn in found money hoping to get it back (well most don't) but what a rotten thing to do to a teenager who did the right thing.  After the story hit the news there was a public outcry and they did decide to let her keep it if no rightful owner came forward.  I have to say kudos to her for doing what was right.  More than once I have turned in a wallet or credit card that someone dropped or left somewhere.  I can only hope that my kiddies do the same thing if they find things that people may be missing.  In the meantime, I will continue to scan the bushes on the side of the road for a big old bag of cash waiting to come home with me!
Posted by Staceroo at 1:12 PM