Clearly the gods heard my complaint observation yesterday about the fact that I have the only child in the world who is not crawling yet.  That is the only explanation for the way my night unfolded.

My dear Hubby had to run off after work to do some work on our rental home, so I was on my own with Little Miss and Kiddo.  No biggie.  I can put on my big girl panties and get through the evening all by myself.

I had to make two meals because I am trying not to eat a lot of white flour or sugar and Kiddo wanted pasta.  I put on a pot of pasta for him with some sauce and some veggies and fish for myself.  I was entertaining Little Miss who decided she'd had enough and wanted to be carried everywhere.  Rather than put in the ear plugs listen to incessant whining, I picked her up and walked over to the counter.  I had been cutting a cucumber and thought I'd see if she liked it.  No sooner did I reach for it when her right hand shot out at the speed of light to grab the bottle of olive oil on the counter and catapult it to the floor.  It was like it was in slow motion, and before it even left the counter I knew that the meeting of a one litre glass bottle (full I might add) and my ceramic floor would not be pretty.  Unless you are into abstract art, it was not. 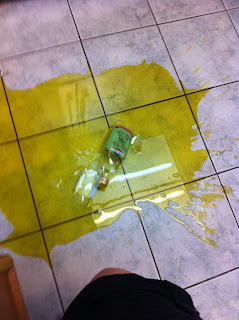 This was the quick shot I took before the tears started...Little Miss's not mine, but mine were close.  I began to laugh, because I had no clue how to clean up the mixture of oil and glass with a baby in my arms.  The pasta began to overflow and the oven was beeping, baby was crying and my dogs chose that moment to try to get close to the action.

My Kiddo let the dogs outside to dig holes unsupervised in our new grass.  I handed Little Miss to Kiddo and she began to scream like I was handing her over to Ted Bundy.  He offered to go and give her her bottle which was a huge help.  I stood watching the oil spill get larger and larger, and only when it began to seep between the wood in the cupboards and floor did I spring to action.  I grabbed paper towels and tried to sop up the mess.  I picked up the larger shards, but what you can't see are the hundred of tiny shards of glass that found their way to my neighbour's backyard.  Seriously there was glass everywhere.  There was oil dripping down my dishwasher, oven and fridge and every lower cabinet in the kitchen.  I ran out of paper towels and ran to get more.  In the process I stepped in the oil with my flip flop (which I had quickly put on to clean up) which meant that every single step I took was like skating on ice.  I had to hold both arms straight out to maintain balance and move very slowly.

I could hear Little Miss beginning to cry again - she'd finished her bottle in record time and was screaming.  Kiddo came down and didn't know what to do so I took her.  He went to eat his pasta while my dinner continued to overcook.  Kiddo then outside to check on the dogs and I took Little Miss upstairs.  She was super fussy so I tried to put her down for the night.  She was quiet for a few minutes, allowing me to pick up more glass and oil, but then the "COMEGETMENOWI'MNOTSTAYINGHEREANYMORE" screams started.  I tried to ignore but it broke my heart and I truly had no energy to even try to think about how to get all of the oily glass off the floor.

I sat and played with Little Miss for a bit and tried to call my hubby to come and rescue me.  I'm a strong, independent woman but I seriously needed help.  Even for 20 minutes.  Just to be there to hold the baby in one hand and a shot of tequila in the other.

I was finally able to settle her down enough to sit in her highchair while I worked on the floor.  I tried a wet cloth - just got glass all tangled in it and had to throw it out because I was too afraid to try wringing it out.  I used paper towels to get the most of it and started on the mopping.  I mopped the floor twice with hot water and Mr. Clean.  There were still however shards of glass here and there.  I grabbed the broom to sweep what I could.  Eventually I washed the floor on my hands and knees with hot water and vinegar to try to cut the grease.  After this, around 8:30pm, I finally sat down to eat my crappy, overcooked dinner and realized I had no olive oil for my spinach...crap!

Dear hubby came home, we eventually got Little Miss Fussy Pants to bed and that's when my dear hubby thought it'd be funny to tell me that at some point in the evening, the dog had vomited on the carpet.  I looked at him and told him to have fun cleaning it up.  If I'd seen that earlier I'd have thrown my hands up and cracked open the good liquor for sure.

As of late last night, my hubby had stepped on a piece of glass.  I vacuumed the kitchen today and found several more pieces of glass.  This afternoon I found glass in my dining room and olive oil dripped down the door of my front hall closet.

I get it.  Message received loud and clear.  I am sooo happy my little girl is not yet mobile.
Posted by Staceroo at 1:10 PM

Oh no! I've had plenty of glass breaking and one giant oil spill, but never together. I'm impressed! :)

I stood there speechless just laughing because it was so absurd. I found out afterwards that pouring salt on it would have made the cleanup a lot easier...Go big or go home I guess!