Today was a rainy overcast day but I didn't care because I was off to meet my good friend Mimi for lunch. It was a bit of a trek for us (about an hour) to get to the restaurant so I tried very hard to keep little Miss up so she could nap in the car.  She became crazy sleep-starved mutant baby for awhile and I ran from one room to the next trying to get ready.  At one point I ran through the house in my underwear so I could get dressed where she was playing in her room because she has hit that point where you must be in sight at all times.  I debated packing her into the car and driving circles around my neighbourhood just to get her to sleep sooner to stop the persistent 'whiiiiiine' but we made it and ended up leaving late as usual.

She slept the whole way and upon arriving (apparently I drove fast because we were early) I got a text from my friend that there'd been an accident so she'd be late (she wasn't in it, but had to give a statement).  I took the opportunity to wander through the nearby park...luckily the rain was holding off  so we stayed dry (at least at that point).

I will apologize for the quality of the shots - I forgot to bring my camera but couldn't miss taking a few pics.  If it'd been drier outside I would have had Little Miss on the grass, but it was far too wet. 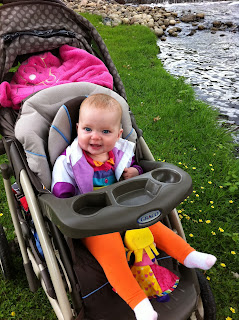 This is beside the river/stream - the water was quite loud here and Little Miss loved it. 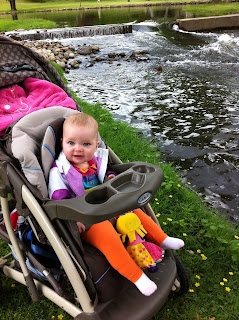 I had a hard time getting her to turn away from the mesmerizing water.  "Come on mom, leave me alone!" 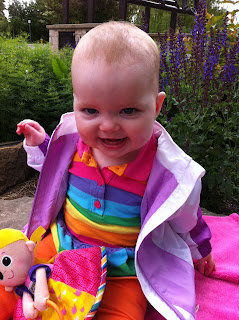 Sitting on some giant boulders near the perimeter of the park. 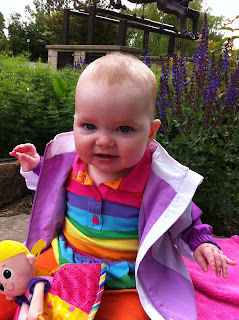 Right before the long, loud whiiine to indicate that she'd had just about enough of this!
We decided to go for a walk around the town while waiting for Mimi.  It was very quaint and beautiful and made me wonder why I don't go there more often.  About 10 minutes into our walk, I realized we'd lost Princess Sophia.  OMG  She's no longer the favourite toy in our house but she still holds a pretty high significance, and Little Miss loves her so much.  We had to find her.  The nice thing with being in a small town it that I knew we might have a chance of finding her.  In a big city, if you drop a dolly people either take it, throw it out, kick it into the street or set it on fire.  I was so hoping we would not come upon a flaming Sophia, melting into a pool of ash and baby drool.  We walked almost all the way back when I spotted a lump across an intersection about a block away.  I walked faster hoping that the wind didn't push Princess Sophia two inches into the street to be flattened by the next set of Goodyears.  As we reached the intersection we had to wait to cross.  I kept my eye on Princess Sophia who had a man standing near her waiting to cross towards me.  Suddenly, he looked down and noticed Princess Sophia. 'Leave it there, leave it there' I kept thinking.  He bent down.  Noooooo!  He picked up Princess Sophia and held her by her clip, allowing her to swing in the wind while he stared at her as if perplexed as to what to do with her.

I had to shout that it was our dolly across the intersection.  I felt like a complete idiot, but was worried that he'd simply walk away with it.  "We dropped it" I shouted.  He looked up and held out Princess Sophia with a smile.  Then he tucked her under his arm and pretended to run away.  Alrighty then.  He carried her across to Little Miss and handed her back.  Little Miss didn't even realize Princess Sophia was missing, but I was so happy to see her again, a bit dusty but good as new.

(Wow if you are still reading I am shocked...who would have thought someone could write so much about a dolly?)

Lunch was interesting.  The power went off in the restaurant, we sat over an hour waiting for the lights and they brought us each a salad to 'tide us over'.  We ate our salad and both of us were still starving, so we asked if they had any other food.  the server said they could not cook anything.  Mimi asked "Do you have any veggies or cheese?"  It's a weird request but we would have eaten chopsticks by that point.  They were able to bring us a nice fruit and cheese plate which we devoured.  By then Little Miss had eaten all of her food, some puffs, some pieces of cracker and bread, some pieces of grape, and was working on my credit card and lip balm.  She was very overdue for a nap and we packed up to leave.  of course the torrential rain that had started greeted me at the door and I was glad I hadn't worn the white t-shirt I had picked out, otherwise the good small town folks would be getting lunch and a show.  Good times people, good times.
Posted by Staceroo at 7:09 PM

Sounds like a fun day! Little Miss is ADORABLE!!! So glad you were able to get Princess Sophia back. :)

Thank you! It was fun and made much better by the return of Princess Sophia! LOL Cheers!