Last week my Dear Hubbs and I decided to jump in the pool to cool off after a stiflingly hot day.  Never mind the fact that the pool was several degrees colder than I like and the sun had gone down - yikes!  Anyway, it was refreshing to say the least but once you got moving it was fine.

As I went to dive in, we heard a loud 'crack'.  My first thought was that a large branch had cracked nearby. We were trying to figure it out but all was quiet.  A few minutes later, while my kiddo bounced on his very creaky, squeaky trampoline, we heard it again, and then again, and several more times.  We were not quiet in our yard and we live in the 'burbs, where, if it weren't for the hedges and trees we could see into at least four neighbours' yards.

My Kiddo decided to go inside - he kept saying he thought it was a bb gun and it was fairly close.  I thought he was being overly cautious and it was probably something benign.  Yes I apparently live in the Land of Naivete.  While the Hubbs and I were in the shallow end of our pool which is closest to the house, we heard the sound again.  Suddenly we both felt/heard something whiz past our heads, hit our deck and hit an empty beer bottle we had in a small bucket.  We both looked at the deck dumbstruck.  He shouted something 9I cannot honestly remember what it was) and I shouted "Was that a bb gun?"  We heard a delayed response asking "Did we hit something?"  I shouted back "You almost hit me in the head, and then hit a bottle on our deck.  Is that a bb gun?"  (Keep in mind that we cannot see the yard or person who did this - we are lucky to have some great tree/shrub coverage)  He shouted back "sorry, it's an air rifle, we'll stop, sorry about that." 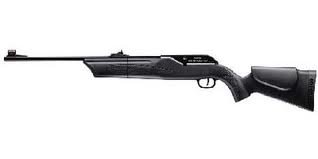 I found the pellet in the bucket - it was small, lead and pointed on one end.  It is powerful enough to rip through a pop can - I know this because we have shot at pop cans at my Auntie's house a few times.  The difference is that she lives in the country, with a farmer's field on the other side of the pop can with no houses in sight at all.  When we shoot all people must stand clear and no one walks into the range of the gun if it's in someone's hands...you know safety.

Dear hubby and I were incredulous as we stared at the corner of the yard where the shot had come from, the same exact spot where Kiddo had been trampolining only moments before.  A moment later as we got out of the pool still in shock, the voice shouted again, "Sorry about that."  We could only reply "Okay," as we dried off and went into the house, our fun ruined for the night.  We debated calling the police however they had apologized twice and had stopped using the rifle.

Once inside I seethed with anger - what if they'd hit us in the head, what if they'd hit Kiddo when he'd been on the trampoline, what if Little Miss had been outside with us...I was livid.  In retrospect we should have just called the cops, but at the time we just kept thinking 'it's never happened before, they apologized and they stopped'.  Yes we are naive and too damn nice.

The next day I called the police at the urging of my Facebook peeps just to ask about the legality of an air rifle in the city.  After consulting the Firearms dept (so official!) the cop assured me that it was illegal and if they did it again to contact them.

That afternoon, I was returning from a quick trip to the store and no sooner did I close the trunk of my car than I heard the same 'crack' sound.  Insert much profanity here.  I listened and heard it one more time.  I got Little Miss in the house and called the police.  They came to see me after they went to the house.  It was two boys 18 and 21 who were home alone...yes, adults, but their parents were at work and they acted like children.

They apologized and the cop told them he would not take the rifle, but if they did it again he'd charge them and confiscate the weapon.  20 min later they were at it again.  I heard it four times then called the cops again, shaking with anger and honestly, fear - people who are that stupid may try to get back at me. I locked all of the doors and kept the doggies close.  The cop came back and informed me that they were not actually using the gun - they had been BBQing and there is no lid on their BBQ - every time they closed it it made almost the same sound as the gun.  I was skeptical, but the cop told me there was BBQ food all around, the BBQ was hot and the gun was in the exact same spot he'd left it

Yes folks...I had been afraid of a barbeque.  In my defense, I was on edge from the last two incidents so cut me a break.
Posted by Staceroo at 3:45 AM

are you even kidding me.. You must be still freakin mad.. Oh hon I hope those punks don't do that again :( ahhh stupid kids.. why was I ever one!! I hate them.. ha ha

glad your all safe

Wow!You guys are "big" people!!
If that had happened to myself or my hubby,, those poor kids wouldn't know what hit them.. I can see my hubby chasing them down the street as I type.
Thank god you're all alright! I'm very surprised the cops didn't take that more seriously...

Oh my God!!!! That is insane!! I'd be freaked too. What a couple of morons, seriously.