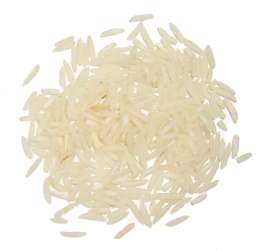 The last five times I have cooked rice I have spilled some on the floor.  Yes - every single time.  I have gotten super careful, on rice patrol you might say to be sure I don't spill and yet, it's like it jumps out of the pot or the dish screaming "Save yourselves, save yourselves!!!" as it plummets to the great big doggie dish that is my floor.

The first time it happened was a couple of months ago.  I had a bit of leftover Spanish rice that hadn't gotten eaten and I was throwing it out.  I mistakenly thought it'd stay in a clump in the bowl as I poured into the garbage, but it all came tumbling out like crazy.  Some of it, maybe 5 pieces hit the garbage, while the rest jumped clear of the white plastic bin.  Cooper instantly ran over to help me with clean-up patrol.  I cleaned the rest (or so I thought).

For the next several days I would find Cooper at odd times almost laying on the floor with his head sideways jammed up near the garbage can.  I thought he was just licking it (which is gross anyways) but soon realized that there were small bits of rice that had gotten caught in the open/close mechanism, so every time we stepped on the lever to open it, a few rice pieces fell to the floor like a free gumball machine for doggies.  I took it all apart and laughed at how much rice was trapped there.  Cooper would have snacked for weeks if I hadn't cleaned it!

The second time, it was when I was stirring up the cooked rice in the pot.  Apparently my bicep is much stronger than I realized because as the spoon circled the pot, the rice went flying out.  Of course Charly and Cooper jumped in to help...such helpful doggies!

This has been repeated several times.  Yesterday, I was pouring some cold rice into a bowl and clearly forgot the first episode because once again the rice went every which way but in the bowl.  Sigh.  At least rice is not bad for dogs!  Cooper was like a little hound as he circled the kitchen with his nose to the ground, his tongue popping out every few steps to get a piece of rice.  Someday I will learn to be more careful...until then my doggies get an unexpected treat now and then!
Posted by Staceroo at 6:52 AM