Ring That Bell Of Hope!

On Friday my dear hubby, Little Miss and I had the honour of heading to the hospital to watch while my father in law rang the bell signifying that he has completed a long, grueling course of chemotherapy.  He began his chemo in the fall of 2010 as part of his treatment for prostate cancer.  After 10 treatments he is finally finished and we wanted to show some support and let him know how proud we are of him.  We waited for his last treatment to finish while Little Miss charmed everyone she encountered with her big toothy grin and drooly chin, and then when he was finished, we watched while he walked over to the bell and rang it.  It signifies the end of a long course of treatment and we could hear clapping and "woo hoo"ing throughout the chemotherapy wing. 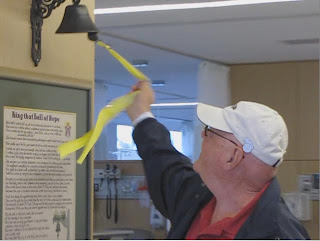 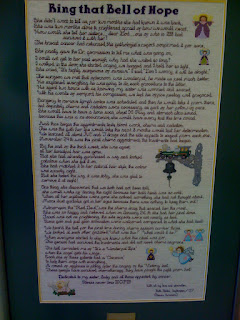 This is the poem that hangs behind the bell.
I have copied it below if you would like to read it.

RING THAT BELL OF HOPE
She didn’t want to tell us, for two months she had known it was back.
She was two months alone & frightened, afraid of how we would react.
How would she tell her sisters, dear God … the one who had eight years earlier survived it with her?
The breast cancer had returned, the pathologist report confirmed it for sure.
She finally gave the doctor. permission to tell me what was going on.
I could not get to her fast enough, why had she waited so long?
I walked in the door, she started crying, we hugged and I held her so tight
She cried, “It’s highly suspicious of invasive”. I said, “Don’t worry, it will be alright.”
The surgeon we met that afternoon was wonderful; he made us feel so much better.
He explained everything he was going to do, each procedure to the letter.
He spent two hours with us, knowing my sister was frightened and scared.
With his words of comfort, his compassion, we left his office feeling well prepared.
Surgery to remove lymph nodes was scheduled and then he would take it from there.
But definitely chemo and radiation were necessary as part of her follow-up care.
She would have to have a bone scan, chest X-Ray and stomach ultra-sound.
Because this was a recurrence she would have every test this time round.
And thus began the appointments, tests, blood work, chemo and radiation.
This was the path her life would take; the next eight months would test her determination.
We learned all about “AC” and “T” drugs and the side effects to expect from each one.
November 24th, was the first chemo appointment; the treatments had begun.
By the end of the third week she was upset, all her beautiful hair was gone,
but she had already purchased a wig and looked fabulous when she put it on.
She had matched it to her natural hair style, the colour was exactly right …
but she hated the wig; it was itchy, she was glad to remove it at night!
One thing she discovered that we both had not been told.
She would wake up during the night because her bald head was so cold.
When all her eyelashes were gone she noticed something she had not thought about.
More dust particles got in her eyes because there was nothing to keep them out.
Adriamycin, the “Red Devil” was the chemo drug that scared her the most.
She was so happy and relieved when on January 26th she had her final dose.
Taxol was not as frightening, the side effects were not nearly as bad.
Bone pain and just plain exhaustion were welcome compared to what she had had.
We heard the bell, for the first time during chemo session number three.
We looked at each other puzzled, what was this, what could it be?
When everyone started to clap, we knew what this ritual was for.
This person had survived the treatments and did not need chemo anymore.
The bell reminded me of “It’s a Wonderful life”, when the angel gets his wings.
Each one of these patients had a “Clarence” to help them cope with everything.
A round of applause is fitting after the ringing of the “Victory” bell.
These people have survived chemotherapy; they have fought the fight from hell.
Dedicated to my sister Judy and everyone affected by cancer.
Please, never lose hope!!
With all my love and admiration,
Beth Staton
(Cancer Survivor)
Posted by Staceroo at 1:22 PM

What a sweet poem and ceremony!

I agree - it's such a tough battle so to have some sort of celebratory closure is so nice!