Last weekend we spent time at my Auntie J's cottage with some of the ladies in our family which I wrote about here.  I neglected however, to let you know about the excitement upon driving home.

I was the chauffeur for both my sister and my Auntie B.  When we left I think I can speak for all of us when I say we were bleary eyed and drained from lack of sleep.  We needed to stop at the end of the cottage road to throw out a broken chair (poor Auntie B!) so my Auntie J told us where to go to find the garbage bin.  It was very easy to find and we pulled over so Auntie B could jump out to toss the chair.  We continued along the way and about 10 minutes later as we drove along the hilly, country roads my sister asks "I wonder where the garbage bin is."  Ummm okay.  We told her that we had stopped already.  She didn't believe us.  She had absolutely no recollection whatsoever...none...nada...zip.  There has never been a time when I was so happy I was driving! LOL

When we arrived back in our city I went straight to drop of my sister who lives downtown.  We helped her carry her stuff inside and went back to the car.  Just as I was getting ready to get in I saw something that chilled my blood.  Literally.  It scared the living daylights out of me.

There was a large pile of garbage at the road which looked like the remnants of someone either moving in or moving out.  This is what I saw. 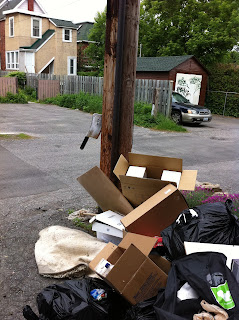 See, your eyes go first to the pile of crap don't they.  But keep looking.  And remember (well you can't remember cause I didn't tell you but anyways) that my sister lives in a very nice house in an 'up and coming' area.  Her home has been totally renovated and is beautiful but there are still many that haven't been and the area still isn't the best.   I stood there taking in the scene above, not sure what to do.  I didn't want to get closer - it was too scary.  My Auntie B was sitting in the car and I opened the door, not taking my eyes off the giant knife and told her to 'look over there'.  She did and her eyeballs got as big as saucers.  We were nervously giggling, not wanting to just drive away but not sure what to do.

It was like an invitation to any bad people to come and get the giant knife and start hacking people up.  I went to the house and got my sister and told her to come and see something...she followed me and I could tell the instant that she saw the knife.  Her footsteps stopped.

We stood there staring at it as though it would grow little legs and push itself from the post and walk away.  We decided there was safety in numbers so together we slowly approached. 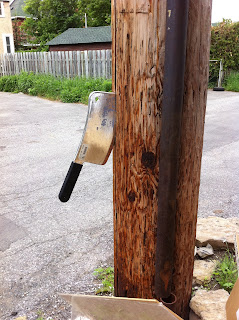 Holy bajeepers that is one big knife!  There was something odd about it though.  It seemed a bit too shiny.  We crept closer, looking like complete and total idiots.  Suddenly I started to laugh, the realization of what it was dawning over me.  Yep - it was a Halloween knife.  In June.  In a post.
It was completely plastic and once we both saw this we couldn't stop laughing.  I looked around to see a neighbour watching us and figured out that we were probably her morning entertainment.  Oh boy.  Time to dial the crazy down just a notch and get on with the day.
Posted by Staceroo at 7:31 AM

Yep! Insane! Clearly someone wanted to have fun with people...and did!