Yes.  I am in patio hell.  I posted that on Facebook and a friend wrote back asking "How can a patio be hell?"  It occured to me that she meant this kind of patio... 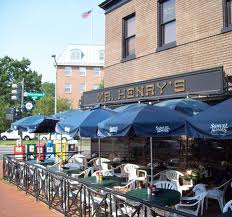 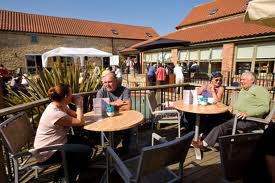 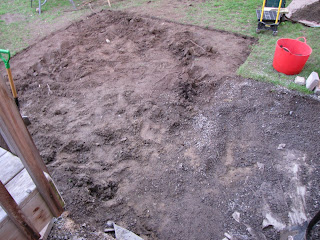 Beautiful isn't it?  I tried putting my chair in the hole last night and ordering a beer, but nobody came.  Crappy service I say!
You see, we bought a house last year, that has a huge yard for the suburbs.  I'd been watching this street for years while taking my kiddo for walks when he was a baby, and then when we'd drive past in later years.  It is a small circle, and as such the yards are irregular, but ginormous.  When this house was for sale, the asking price was well below what you'd expect due to the fact that it was a military sale.
Unfortunately, there's a lot to be done.  The entire inside of the house is original, so while it's not in bad shape and is livable for now, it does need some updating eventually.  As for the yard, we have a beautiful pool, a small deck off the house, but nowhere to put a patio table and chairs.  Thus the patio hole.
My hubby and I are handy people, and we'd decided that for this year, we would not be taking on any new projects.  Last year we prepped our home to rent, which entailed hours upon hours and days upon days of cleaning, fixing, painting and , well, more painting.  All while 7 months pregnant.  Then we got the pleasure of packing, moving, painting a bit more (just the kids' rooms for now), unpacking, organizing etc etc.   Then we had a baby and life got interesting!
So this year our plan was to seed the lawn a bit, build a few shelves and otherwise enjoy our summer, our pool and our friends and family.  We tried last night to figure out whose idea the patio was.  The best we could come up with was that it was my mother's idea.
Seeing as neither of us have a flipping cluye what we're doing, we;ve spent much of our time standing in the hole, surveying the carnage, and saying "hmm".  That doesn't work to get anything done, but it does make you feel as though you're doing *something*.
Oh, and to that the fact that we have Little Miss and it's been raining torentially off and on all week, we ended up with this pic. 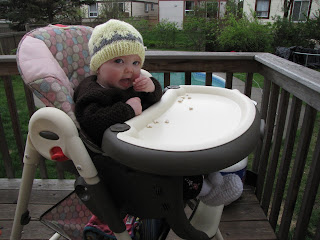 Yep, mid May, and my princess is bundled up in a knit touque, knitted slippers and a two piece knit outfit over her clothes.  She's doign a good job overseeing our "hmmm ing" though!

I'm sure that someday we'll finish the patio and it'll be all pretty and I'll post a pic.  Right now, I am thinking I might put up a net and play some beach volleyball.

k is it strange that i enjoyed reading your post and was thinking mmmmmmmmmmmmmmmm patio but then quickly changed to ohhhhhhhhhhhh is little miss eating cherrio's? when did she start that? and how many teeth does she have? got to love other mom's for this :)
happy friday friend!

k is it strange that i enjoyed reading your post and was thinking mmmmmmmmmmmmmmmm patio but then quickly changed to ohhhhhhhhhhhh is little miss eating cherrio's? when did she start that? and how many teeth does she have? got to love other mom's for this :)
happy friday friend!

haha - leave it to another mom! She's actually eating those little puffs - Gerber makes them but I prefer the shape of the Walmart brand ones (Parents Choice I think) - they seem a little smaller. They melt in her mouth while she gums them! And they're really tasty if I do say so myself! No teeth yet, so while I tried Cheerios, she wasn't so good with them. She is really starting to prefer to pick up her own food though - such fun! Have yourself a great long weekend!

We only had a tiny, basically useless patio for the past three years. So this year we decided to finally get a bigger one. At first, we thought it was something we'd do ourselves. But in the end, we decided to hire a company to put it in. In the end, I'm glad we chose to have professionals do it (even though I wish we'd gone with a different company.) I didn't realize how much was involved with a patio. I just thought you dig out the grass, lay down sand, put the brick down, fill cracks with sand. Wow...I was wrong. Tons of flattening and leveling is involved. Much of it done with equipment we don't have. Much more complicated than I thought.

The funny thing is we were just doing this small patio temporarily - hoping to have the money to totally redo the whole backyard in three years...I would rather move now! Or wait five years and pay the money to hire a company. Holy hannah it's a lot of work - I agree about the equipment...some of what we did by hand could have been much easier with the right tools! Good for you for hiring someone! I've learned my lesson!

well momma off to Walmart I go today :) i think lovely would love to do it too.. great tip thanks hon

LOL - Hope she enjoys them! The only tip I have is that I used to break them in half when she first tried them. Now she is just fine with whole ones. And of course I watch her because if she could cram 18 of them in at once she would! Let me know how she likes them!