What Doesn't Kill Me Will Make Me Very, Very Sore. 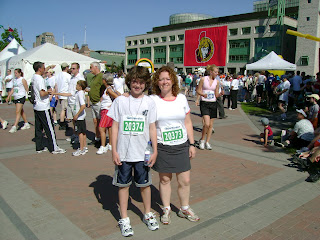 Today, I am running 10k.  After I ran 8k several weeks ago, I have not run since...at all.
I don't know why I lost my steam, but I did and now, I will be sorry.  The pic above is from my second ever 5k - I ran it with my kiddo - the one that looks like he tripped and the mop landed on his head.  I did alright that year.  My first ever 5k the year before was bad.  So very, very bad.  You see, it was on a hot day, so hot that just walking outside caused my skin to charcoal and my hair to frizz like, well, something frizzy.﻿
I had no clue what I was doing but I had heard that it was good to eat pasta before a run.  I later learned that the pasta should be consumed several hours before, like if you're running in the morning, you eat pasta the night before for dinner.  I didn't know this at the time though so before our 4pm run, I ate a very large bowl of pasta with extremely spicy sauce at about 1pm.  Yep, very spicy.  I realized my mistake not long into the run...about 38 steps to be exact.  Spice and heavy food does not help you run.  Unless it's a bathroom you're headed for of course.  Luckily I avoided a bathroom emergency, however the stomach pains I endured for that 5k were horrendous.  They were not typical pains...it was like I had swallowed acid and it was slowly erroding the inside of my belly one excruciating layer at a time...good times I tell ya.  There were times I had to walk and even then I just wanted to lay on the side, behind the spectators, close my eyes and let the sun cook me to medium well.  My insides already felt well done so the outside may as well match.  Ugh.  Just thinking about it makes me cringe at my complete stupidity.

Oh well, I did it and was proud of myself even while I laughed at what a moron I'd been.  Since then I've run the 5k once more and done 10k runs several times.  I have no desire to run a half marathon - I have a lot of respect for those who do it, but it's just not my goal.

We shall see how I do today.  I am nervous having not trained but I know I can do it.  Some good old 80's tunes and a mostly empty stomach should help, and if that fails, knowing I am coming home to beer and pizza will do the trick!