I have a dilemma.  It's not a big one yet but it's weighing on my mind a bit.  My 16 yr old son is in grade 11, and will be graduating next year.  He had the opportunity to go to another city for the weekend this past winter with some of his classmates on a trip run through a travel agency catering to teenagers.  Yep...it was a booze-filled, non chaperoned party weekend.  When he asked if he could go, I was not certaing what the weekend would entail, but quickly realized that this was not a school sanctioned trip, but an outside company that got permission to send pamphlets home with our students.

I did what any good mom does...I called another mom to ask her if her son was going.  It wasn't my attempt to cop out to peer pressure, but rather I knew she is very involved in parent council with our board.  It turns out my instincts were right and neither of our sons went (although according to them, "Everybody" else did).  My kiddo had also had an opportunity to travel to Greece (which I would have killed to chaperone) but he decided to opt out of that in favour of a possible Germany/Ireland trip next year.  I was fully in support of either of these as they are school sanctioned and chaperoned.  I'm not naive - I know that they can still get into significant trouble an ocean away, but at least the teachers would be looking out for them.

Now he has told me that the students are planning a grad trip to Punta Cana.  I knew about it since he leaves his facebook page open all the time and I saw the little "event" listing at the side.  When he mentioned it, he followed up by saying "I know you won't let me go."  I didn't say anything, but if he really wanted to go, I'd seriously consider it.  I mean he'll almost be 18.  A trip to the beach...how nice!  What a nice, relaxing way to get ready for university! 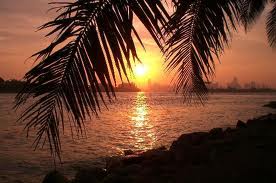 except, just as quickly, my thoughts turned to...a trip to the beach...how nice to drink until you puke and pass out and wake up and drink until you puke and get naked and streak through the hotel, and drink some more and trash your room and get arrested and thrown into a foreign jail and not have access to a fair justice system and sit there until you are 31 (okay...maybe a little over the top but you get the point?!?) 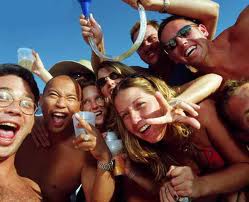 I picture the typical, expected spring break things like drinking and craziness, and then I also picture things like Natalie Holloway disappearing on a grad trip, and drugs and spiked drinks and the Canadian teen who ended up in a Mexican jail for god knows how long.  Gah!

I know for some, it's a right of passage, and I have to realize that he's growing up and hope that what I have taught him will be enough to get him through life in one piece, but other times I think..."He's still my little boy!"  Wasn't it just yesterday he brought home a rearview mirror he found on the side of the road to add to his 'collection' of found-crap?  Or just last week he was giggling furiously at my scream upon finding a very realistic hairy spider under my pillow?  Wasn't it just recently I was rushing my kindergartener to the ER for stitches to his lip after running in class and banging his face into the desk?

Anyways, I digress.  My dilemma is this...Do I bring up the Punta Cana vacation and tell him that if he really wants to go, and if he pays half, he can go?  Or do I just leave it alone, having him think that I will not let him go?  Does he even *want* to go, or did he just throw it out there but has no real interest?  My inclination is to just leave it alone and not mention it again unless he does.  I mean, right now we are saving to send him to Germany, which is a far cooler place to go since he's so interested in World War 2 stuff.  I think I probably won't mention the grad trip, and deal with it if he brings it up again.

I have to say - when you have a baby, you spent hours worrying about their safety, are they warm enough, are they hungry, is that fever too high...then they go off to school and you worry about bullying, loneliness, stress and whether they are fitting in with their peer group.  I always thought the worries would decrease as they grew, but I have learned that they increase.  When they are little, you can't protect them all the time but you do have control over an awful lot.  As they grow you have to hope that the values you modelled and taught them are enough to help them find their way in this big, scary world.  And you have to let go.  Just not yet.