I am a Bzz Agent, and for the recent Bzz Campaign I received coupons to purchase McCain Purely Potatoes to try and report back on what I think.  At the grocery store, I noticed both white potatoes and sweet potatoes.  I figured I would start with white since that's what my dear hubby prefers and I bought two bags because I wasn't sure if one would be enough.  (You see, my sweet husband can pile away several pounds of potatoes in one sitting...more if there's gravy on them.  It's kind of a family joke and we make sure to make a LOT of potatoes at our house!)

The bag listed several ways to cook them, and they were already peeled, washed and cut into small chunks.  I was going to make both and mash them, but decided to try them two different ways.  For the first bag, I opened the top and poured them into a bowl (still frozen) and added some olive oil and spices.  I make these spicy potatoes with fresh potatoes all the time, and the one thing I did not like about the McCain Purely Potatoes was the fact that the oil stuck to the frozen potatoes, rather than nicely coating them.  I then set the over to 425 degrees and popped them on a cookie sheet and into the oven. 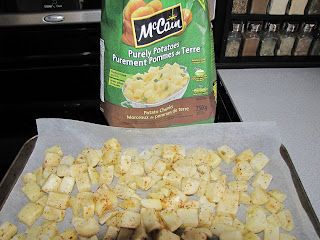 I decided to microwave the other bag - you just stick it in the microwave and turn it on for 11-13 minutes.  I didn't love this, because after 12 minutes, I had no way of knowing if they needed more time (since the bag was still sealed.  When I took them out (very carefully since the steam was very hot) and poured them into a bowl I found some were a bit sticky.  I mashed them with butter and milk, and found they had a consistency that seemed a bit more dry than fresh potatoes.  I ended up using quite a bit more butter and milk than I would normally to try to make them more moist but finally gave up.  This is not a great pic - it's the best I could get though! 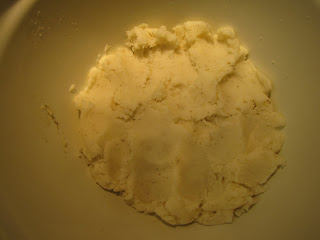 Once mashed I tasted them and found a slightly funny taste...I can't really describe it except to say it was kind of like if you'd mashed potatoes without having washed them.  I added some pepper and savoury to mask the taste.

My dear hubby liked both varieties just fine, although said my homemade spicy potatoes are better.  He added gravy to the mashed so he liked those too!  My son also noticed a funny taste but ate all of his potatoes.  I could not finish the mashed potatoes - the dry texture and offputting flavour ruined it.

Also, if we were doing roasted/spicy potatoes again, one bag would have been plenty, but for mashed, it would not be nearly enough (for our family).

All in all - we'll probably buy these again for nights that I am not home and my husband has to cook - he liked how easy they were to prepare.

Otherwise, we'll stick with fresh potatoes!
Posted by Staceroo at 9:51 AM

Potatoes in a preserved bag are scary to begin with :)

It's not something I'd ordinarily buy...but it says it is all natural except a preservative to keep the colour. It wasn't my cup of tea but I can see why people would like them...so easy!