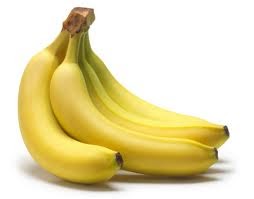 I am not especially fond of bananas...I am quite happy to have one maybe once a year, unless I am running and then I try to have one after a run.  I just prefer my fruit to be a bit more tangy than blah.  That said, I will eat them without complaint (as long as they are not brown and spotty or green and hard...somewhere in the nice yellow, firm category please!)

A couple of years ago, dear hubby came home from his job as a banker, and proudly announced "I had a banana today!"  My reply was a confused "Oookaaay".  He then told me that he has never eaten a banana before.  Ever.  I looked at him with disbelief, but he was serious.  And I started howling...dying laughing at the thought that a man in his late thirties had never, ever eaten a banana.

So, I did what all good wives do when their husbands tell them something important...I called his mother.  As I recounted the funny story, she started to laugh and thanked me for reminding her of something.  When my dear hubby was a baby, his mom gave him a banana to hold, which most babies would probably squish a bit and taste and get messy and enjoy.  Not my big guy.  His whole body stiffened up and he began to shake from head to toe with what appeared to be disgust.  Yep - at six months old he was NOT having a banana.

Thus, 36 years later he was able to proudly proclaim, "I ate a banana today," with a big, goofy smile on his face.

After I tired of making fun of him with his mom, I got off the phone and asked..."Did you like the banana?"

He replied "No, it was disgusting."  No more bananas for my dear hubby.

Soooo today I decided to see what Little Miss would do with a banana. 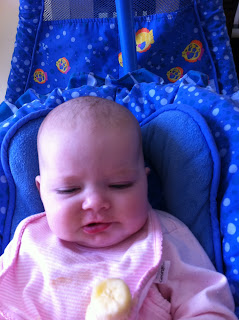 This photo was taken immediately following the look of disgust and immediately prior to her tossing it on the floor...guess she truly is Daddy's Little Girl.﻿
Posted by Staceroo at 2:06 PM