As I mentioned before, I had an adventure today.  I decided to be brave and check out the local theatre for Movies for Mommies.  Basically one or two movies each week are specifically for parents with babies.  This way you don't worry as much about interrupting or irritating other people if your baby fusses.

The movie playing today was The Adjustment Bureau with Matt Damon.  I was nervous to go - first of all I was by myself (well, with Little Miss)...seeing a movie by myself is not super comfortable for me.  Plus, what if Little Miss was super fussy and I couldn't calm her.  Of course I was able to talk myself out of this one by reminding myself that I would not be shackled to my seat.  If I needed to leave, the door would be there.  The final push came this weekend when my friend Juicy (not her real name of course, but her longtime nickname! hee hee) told me that when her little one was, well, little, she went to the mommy movies all the time and it was lots of fun.  She told me I could do it...so I decided to be brave!

I timed it well so that Little Miss would be due to nap at the time the movie started.  Unfortunately she fell asleep in the car and got a 15 minutes cat nap in.  I also ate a healthy lunch so I wouldn't be too tempted by the artery clogging but oh so delicious popcorn with butter.  Once there I got myself a drink, bypassed the food, and went to the theatre.

I was super impressed to see that right outside the theatre doors was a rather large table covered with soft baby blankets for a changing area.  Along the back edge of the table were stacks of free diapers in sizes ranging from 1 to 4, along with wipes, kleenex, rash cream and hand sanitizer.  You had me at hello!  I wanted to take a picture of this but waited until the movie was over at which point there were several naked babies on the table...rather than be arrested on the spot for taking inappropriate pics I decided to just get a picture next time!

Upon entering the theatre, I had my pick of seats...what a big decision.  Do I sit close to the door to make a hasty escape if need be? (I used to wonder the same thing on first dates)  Do I sit along the middle area with carpet in front of it to let Little Miss roll around on her blanket?  Maybe at the very back...nothing strategic here, I just like the very back.  In the end I decided to sit one row back in the middle section, and plopped the carseat down in the seat beside me.  I was surprised at how many other moms with babies arrived after I did...maybe 20 or more.  Many of the babies were younger than Little Miss - clearly it's easier to keep the tiny ones quiet.  Overall though she was pretty good.  I couldn't get her to sleep for quite some time - she drank her entire bottle and then played with her toys.  I alternated between having her on my lap or in her carseat.

In the early part of the movie there were a couple of crying babies.  The moms weren't super quick to take them out so I started off being a bit irritated (I know I chose to be there, but the crying just gets to you...especially when your own little princess is being so good!)  They did get up and leave for a couple of minutes, returning when their little ones had quieted which was nice.

After about 30-45 minutes Little Miss got a little whiny, so I picked her up and walked to the door to rock her.  After about 10 minutes of this she fell sound asleep for the rest of the movie!  Bonus!  All in all I would highly recommend this to anyone with babies...it was a great way to get out and do something different.

The one drawback was the fact that it cost almost $10.  It's not a huge amount, but considering there are crying babies now and then and you miss parts of the movie it would be nice if it were a bit cheaper.

Here's a pic of Little Miss and I just before the movie started - sorry for the crappy quality. 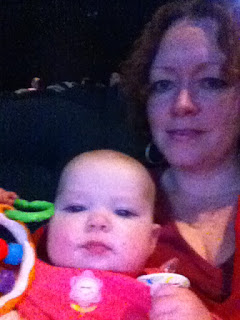 I can't wait to see what's playing next week!
Posted by Staceroo at 1:17 PM

Email ThisBlogThis!Share to TwitterShare to FacebookShare to Pinterest
Labels: Movies for mommies, theatre