Friday afternoon our power went out.  I was a little frazzled as I'd committed to making 10 pounds of scalloped potatoes and meatballs for a get together.  Luckily the meatballs were cooked and just simmering in the slow cooker...the potatoes were not so lucky, as they lay sliced and washed in their pan waiting to bake.

Once I realized the power would be out awhile, I took Little Miss up to the family room to relax.  My 16 yr old kiddo walked past and asked
"What am I supposed to do?"
"What do you mean?" I asked.
"There's no power - what am I supposed to do?"
I laughed and suggested "Why not read a book?"
He smirked and replied "No"
"Why not watch a movie on your personal DVD player?"
"No"
"Okay, you could read a sports magazine."
"No"
At this point I laughed as I realized he had no idea how to entertain himself without electricity.
"How about cleaning your room?"
"I did yesterday," he replied (and he had)
"Play on my iPhone"
"Naw"
"Walk the dogs"
"No"
The whole time he was saying no, he had a half smile on his face as if he were enjoying shooting down every single idea I threw at him.
"Have a snack"
"I just did"
"Hmmm" I glanced around the room and saw the camera.  "Why not take some pictures?"

"Okay" he said.  Wow!  Then he spent ten minutes taking picture after picture of me feeding Little Miss her bottle.  Here is a sample. 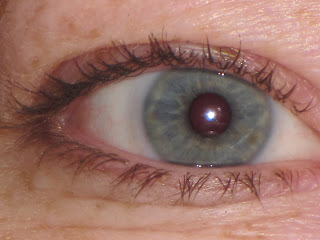 This is a more flattering one.  There were many too hideous to share as I stared a death-stare into the zoomed in camera lens.﻿
Once Little Miss was finished eating, my kiddo and I played a dice game which was fun.  Halfway through the game, the power came back on.  He jumped up and shouted "Later!" and he was gone.  Oh well, it was fun while it lasted!
(PS: The potatoes were a hit!)
Posted by Staceroo at 2:48 PM