We got our Little Miss baptized yesterday.  She was beautiful and so well behaved.  When the Deacon poured the water on her head, she just gazed up at him as if completely mesmerized.  She didn't cry at all through the whole ceremony, which was awesome - I guess torturing her by waking her at 6am worked!

We had a large crowd with us - approximately 25 family members and friends joined us.  Luckily there were only six children/babies being baptized yesterday.  The Deacon told us that last week there were ten, which would make for a very busy (and much longer) ceremony.

We had the family back to the house for some food and drinks - sandwiches, veggies, cheese, squares and cake.  Thanks to those who brought yummy treats!


Some observations about the day:


When you serve punch, you must make sure to provide cups as well...
or at least provide a whole bunch of straws.
Babies don't care that they are all dressed up when they need to spit up (thanks to the Deacon who announced over the microphone "There's some throw up on her dress") ﻿
Dogs are awesome after parties - they eat every single crumb on the floor...and even bits of wrapping paper.
That sticky, crusty spot I found on my daughter's head five hours later is from the squashed up Nutrigrain bar that the two year old was carrying around.
Godparents sometimes let the baby fall over on the table. (Don't worry, you're not fired yet.)
Dogs throw up wrapping paper.
Family and friends are awesome!  We love you all so much!
Here are a few pics: 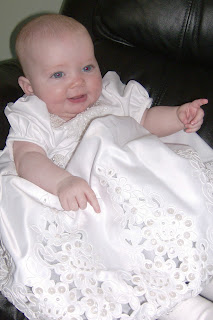 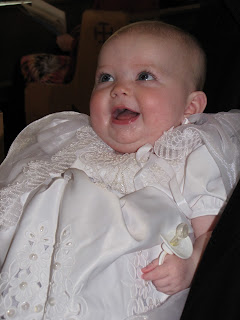 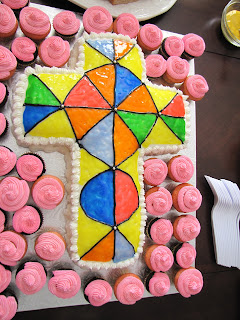 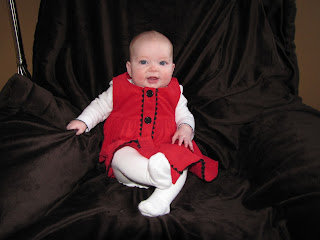