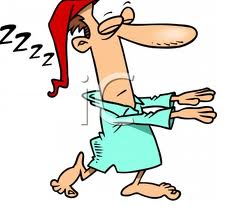 Being the old more mature mommy that I am, I go to bed before my teenager...long before.  The other night while he was working frantically on a school project that no doubt was assigned a month ago but due the following day, I went upstairs, crawled into bed, watched a bit of TV and went to sleep.

Awhile later (although I have no clue what time) I heard my kiddo go to bed - it's difficult not to hear a herd of elephants rumble up the stairs and bang door after door shut along the way!  It seemed then like a lot of time passed (but I have no clue) when I heard him leave his room and go downstairs.  I rolled over to look at the clock to find it reading 1:50 am.  What the heck was he doing up at 1:50am??  I started thinking he might be sick, so I peeled myself out of my slumber and walked to the doorway to find him standing in the hallway at his bedroom doorway.  I hadn't heard him come back up so I just about peed my pants screamed at the sight of him.

When I could speak again I asked, "Are you okay?"  He replied, "Yes".  I asked "Are you just going to bed?"  He mumbled "no," and went into his room and closed the door.  It was a very weird exchange at almost 2 in the morning, but I figured if he wasn't sick or injured then all was well.

The following afternoon, he came home from school and asked "Did I talk to you last night?"  I said "Yes."   He started to laugh.  I said "Don't you remember?"  He then tells me that he was sitting in English class at school and suddenly had a vague recollection of me asking him if he was going to bed, him mumbling 'no' and then turning to go into his room.   He said he had no idea why he was out of bed, or where he went when he went downstairs.  Luckily I know he was only downstairs less than a minute because I'd heard him get up so I know he couldn't have gotten into too much trouble, but it looks like my boy is a sleepwalker.

Either that or he's setting up a nice defense for sneaking out of the house to meet a girl in the near future.  Nice.
Posted by Staceroo at 1:38 PM