At Least It'll Grow Back

I know I've said it before but - I can be a teeny, tiny bit obsessive.  Just a little.  Because of that, the Hubby has learned to just go with the flow...he sort of has to or else he'll get swept away with my obsessiveness.  Lately I am on a hair-cutting kick.  Yes.  I am cutting my own hair...again and again and again.

In the last two weeks I have pulled the scissors out at least 8 times (and that really is not an exaggeration).  I have very curly hair, and had been growing it for over a year to see what it would look like.  Much to my disappointment I looked less like this 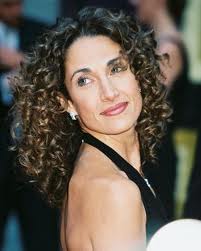 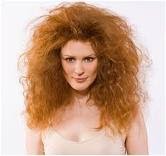 So it was time to cut.  Normal people would hit the salon and enjoy...not me.  Somehow I procrastinate so long that one day I just can't stand it and I must. cut. right. now.

Luckily, because it's so curly the average person can't see how crooked it is...and I stay away from anyone with eyesight better than 20/100 for about two weeks.  So far I have cut at least 10 inches off and I'm not done.  The trick is to only cut an inch or two and then stop.  I then style and go, and decide if I want more off.  This keeps me from going crazy and cutting off my pony tail like I did in Grade 10 - that was not pretty.

Not sure what I will do from here...I suppose a visit to a salon might be in order, but I'll know more after tomorrow's trim!
Posted by Staceroo at 7:02 AM

awww I love your curly hair. Ive always been jealous of those with curly hair i have thick wavy hair and i have to perm it and it never looks natural..